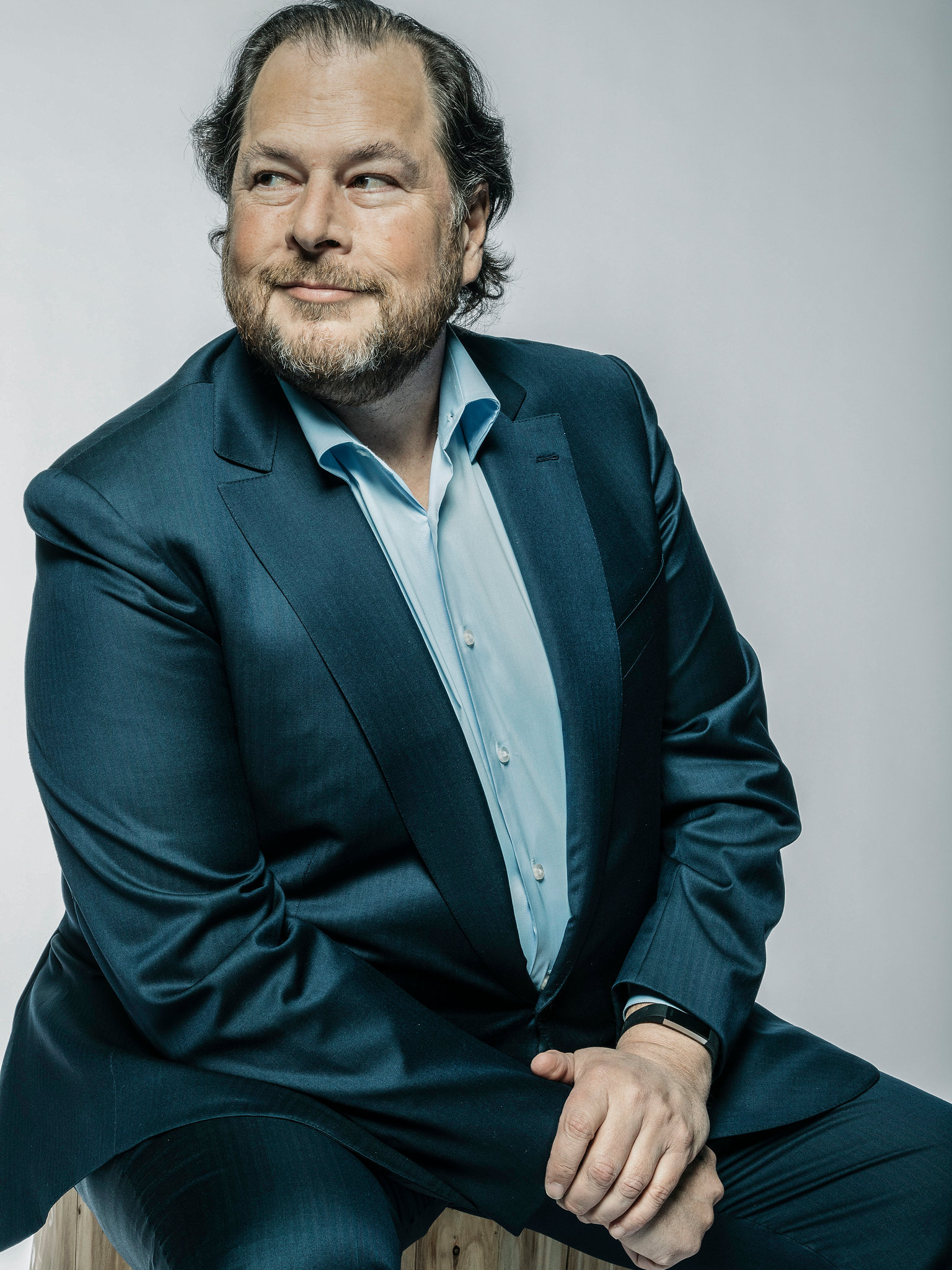 Mr. Benioff, believes he can make the world a better place while also making hefty profits for his company.CreditMatt Edge for The New York Times Salesforce may not be a household name like Facebook or Twitter, but the software company and its chief executive, Marc Benioff, are hugely influential forces in the technology industry. Salesforce is a cloud computing pioneer that helped popularize the software-as-a-service business model. And Mr. Benioff has fashioned himself as a benevolent chieftain who can make the world a better place while making hefty profits, too.

An entrepreneur at an early age, Mr. Benioff became a star executive at Oracle before leaving to co-found Salesforce nearly 20 years ago. Today, Salesforce is worth roughly $100 billion, and Mr. Benioff is a billionaire many times over. Success has emboldened him. A fan of Buddhism, Mr. Benioff has installed meditation rooms throughout Salesforce offices and emerged as an outspoken voice on social issues including L.G.B.T.Q. rights, the gender pay gap and the deleterious effects of social media.

In January, Mr. Benioff made his mark on the San Francisco skyline, moving Salesforce into the tallest office building west of the Mississippi.

This interview, which was condensed and edited for clarity, was conducted at Salesforce headquarters in San Francisco.

Do you want me to lie down?

Yeah. Close your eyes and count backward from 100.

I was born an entrepreneur. When I was about 12 years old, I would go around to people’s homes and repair their antennas and their CB radios. Then I got a regular job at a jewelry store, cleaning the cases after school, which I did not really enjoy. But across the street there was a Radio Shack and that’s where I found a computer for the first time. I wrote my first piece of software, and sold it when I was about 15 years old.

I was at the University of Southern California, putting myself through school with royalties of my software company. And I was writing a bunch of adventure games for the Atari 800, the Apple II, the Commodore 64. Then when the Macintosh was introduced in 1984, I sold my other computers and bought the Macintoshes.

The summer before my junior year, I worked for Apple. There was a pirate flag on the roof. There was a motorcycle in the lobby. Steve Jobs was running between the two Macintosh buildings. It was a big scene.

What did you do there?

No one was really paying attention exactly to what I was doing. I wrote this piece of software which was a game called “Raid on Armonk,” which was where IBM’s headquarters were at the time. And my manager said to me, No, no. You cannot do this.

What did you do after college?

I wrote a business plan for a network-type company based on something that Apple was working on called AppleLink. But U.S.C. was like,  No, no. You’re not going to create a company when you graduate from school. We want you to go get a real job in a real company, and we want you to go into sales. So I asked around, and this person who I was working with at Apple mentioned this company called Oracle.

What did you learn while you were at Oracle?

The professors at U.S.C. said, “When you play with better tennis players, you’re going to get better. You need to go find the best salespeople possible.” And these were phenomenal salespeople at Oracle. They started to work with me and helped me understand how to be a better communicator.

Then Larry [Ellison, Oracle’s co-founder] took notice of me, and I started working directly for him. That was a very powerful moment, when he started to shape how I thought about business. Larry took the long view. He was like, “I want to think about this company over 50 years, not over 10 years or five years.” Now he’s been doing it for 40 years.

Why did you strike out on your own?

As I came into my 10th year at Oracle, I was really burning out, but I couldn’t exactly figure out why. I didn’t have a good feeling when I went in the building. I went into Larry’s office and said, “I need to take some time off.” And right away he said, “Yeah, why don’t you just take a sabbatical. You’ve worked really hard for 10 years.”

First I went to Hawaii for a few months and really, really worked on my meditation practice. Then I went to India for six weeks with a friend of mine who was also going through a similar life transformation. We had these amazing experiences going to all of these different ashrams and meeting all these different spiritual masters. It was almost like a guru tour. I definitely came back from that trip as a different person.

I came back with a clear vision of what the future of the internet was going to be in regards to software-as-a-service and cloud computing. I also had a much deeper sense of my spiritual self. So I said, “When I start a company, I will integrate culture with service.”

We need to have a more enlightened view about the role of companies. — Marc Benioff

How do you make sure new Salesforce employees get what the company’s all about?

On their first day of work, we take everyone and we show them the kitchen and the bathroom and their office and their desk. Then we take them out and they do service in the afternoon. They’ll go to a homeless shelter or they’ll go to the hospital or go to a public school. This is a very core part of our culture.

I want a company where people are excited to come to work every day, where they feel good when they get here, where it doesn’t take from them, but it’s giving to them, it’s giving to others. Why do people want to be here? It’s not that we have more amenities than everybody else. We have less. We don’t have a cafeteria. But we have a stronger purpose and a stronger mission.

Salesforce Tower, which opened in January, now dominates the San Francisco skyline. At 1,070 feet, it is the tallest office building west of the Mississippi.CreditJason Henry for The New York Times

A reader, Ellen McBarnette, asks, “Do public companies have a responsibility to contribute to the public good?”

There’s a shift going on. When I went to U.S.C., it was all about maximizing value for shareholders. But we’re moving into a world of stakeholders. It’s not just about shareholders. Your employees are stakeholders, so are your customers, your partners, the communities that you’re in, the homeless that are nearby, your public schools. A company like ours can’t be successful in an unsuccessful economy or in an unsuccessful environment or where the school system doesn’t work. We have to take responsibility for all of those things.

This idea that somebody put into our heads — that companies are somehow these kind of individuated units that are separate from society and don’t have to be paying attention to the communities they’re in — that is incorrect. We need to have a more enlightened view about the role of companies. This company is not somehow separate from everything else. Are we not all connected? Are we not all one? Isn’t that the point?

So what is Salesforce doing about it?

As a C.E.O., if you’re not doing that in today’s world, you’re making a mistake. We are part of an integrated holistic system which is the global economy, and so Salesforce is part of that and we have to participate in that. Salesforce strongly believes that companies and C.E.O.s have to be activists.

You’ve been outspoken on issues like L.G.B.T.Q. rights and tougher gun laws. What issues are you focused on right now?

We’re working on the homeless programs here. We have a plan to get every homeless family off the streets within five years.

That’s a pretty ambitious goal. Are you setting yourself up for failure?

We’ve already moved hundreds of families back into society and into homes. But we cannot delegate these complex problems off to the government and say, “We’re not all part of it.” They’re part of the solution, but I believe that for $150 million, we can get every homeless person in San Francisco into homes.

You’ve been critical of Facebook lately, especially after the appearance of a memo by Andrew Bosworth, a Facebook vice president, that defended the social network’s growth at any cost.

His memo is very clear. He talks about putting growth above trust, and you can’t do that. Never put growth before trust. If you put growth above trust, then all of a sudden you create a toxic culture. People don’t want to work in that environment or use the product. Then you get these campaigns, #deleteuber, #deletefacebook. It’s a referendum on the culture, not the product.

Has your meditation practice influenced how you lead?

The Key to Motivating Students? Use Technology to ...

Emotional intelligence in the workplace

What Effect Do Pandemics Have On Stress Tests & Op...